Statement by the Indonesia Legal Aid Foundation (YLBHI) On the Meeting of CSO and UN High Commissioner on Human Rights Jakarta, 5 February 2018 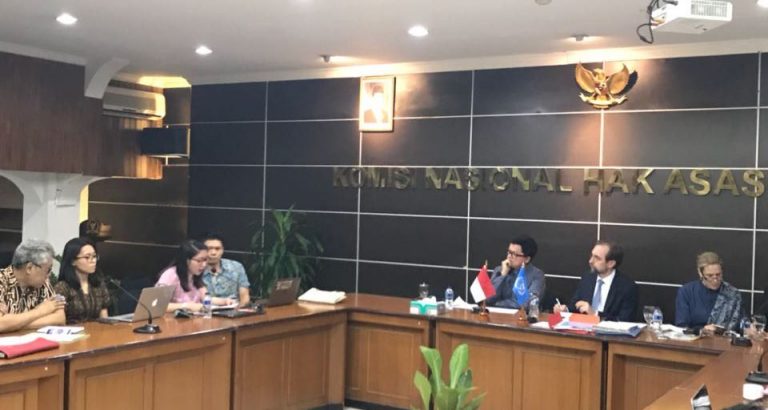 Indonesian Legal Aid Foundation (YLBHI) is a foundation that coordinates 15 legal aid institute offices in 15 provinces in Indonesia. YLBHI today represents the accountability cluster and would like to raise your attention on the lack of accountability in Indonesia, specifically on cases that are related to human rights other than what have mentioned by the Past Human Rights Abuses cluster previously.

There are at least 10 cases which judgments left unexecuted, as mentioned in our submission:

The enactment of Law No. 16 Year 2017 that adopted the Government Regulation in Lieu of Law No. 2 Year 2017 regarding Mass Organization is another excuse for the Government to arbitrarily limit freedom of association especially since it contains the provision that are contrary to the international human rights standards and principles on limitation and derogation. These are only examples of how the state has shifted from rule of law to rule by law state.

We are also highly concerned on the newly signed MoU between the Police and Military dated 23 January 2018,[1] which enables the military involvement specifically in:

Not only about the potential excessive use of force and brutality, this MoU would infringe the division of mandates between the Police and Military (TNI) and cause difficulties for the victims of human rights to get any remedy since the military accountability is not as transparent and is harder to pursue.

Various human rights violations are still rampant at every stage of the criminal justice system, especially torture, inhumane and degrading treatment, as well as impunity for the perpetrators. We believe that the unavailability of check and balances of the Police’s authority and the ineffectiveness of external oversight bodies are among the causes of this problem. In 2017 alone, we recorded that there are 61 criminal charges against human rights defenders mostly environment and land defenders. Other colleagues present in this room could detail further on findings and cases related to this issue.

We therefore humbly request your assistance in urging the Government to fully implement human rights, especially in ensuring the remedy for victims of human rights violations.

We understand your view of the global situation of human rights advocacy, and share your desperation. We fully support your view on 2018’s campaign to promote the UDHR as a tool to push back the many trends across the world that seems to negate and deny the value of human rights. It is our utmost hope that hearing about our situation would fuel your passion, that we still need your role. We would very much support your effort, and hopefully together we could gradually put human rights at the heart of development and policy-making in Indonesia and in the world.